What does it take to produce a truly world class Napa Valley Cabernet Sauvignon? First of all, it takes fruit: grapes grown in that special region that winds around only 2% of the earth’s surface and includes the Napa Valley. But just as important, it takes the expert touch of a master winemaker, someone who can combine artistry, chemistry and a little bit of magic into their craft. For Caspar Estate, that winemaker is Julien Fayard.

Julien is a firm believer that the wine is made in the vineyard. He frequently walks the vineyards and checking on the fruit. Our vineyards have several microclimates because of the row layout and the pockets of the hills and valleys. Julien is very selective, starting with the fruit that is ripe – it can be mid row but often it starts at the end of the row on the western side since it gets the most late afternoon sunlight.

On September 23rd, 2020, Julien supervised the harvest of several tons of our estate cabernet sauvignon, grown on slopes located above the Rutherford Bench in Napa. It was a gorgeous day, producing equally gorgeous fruit. 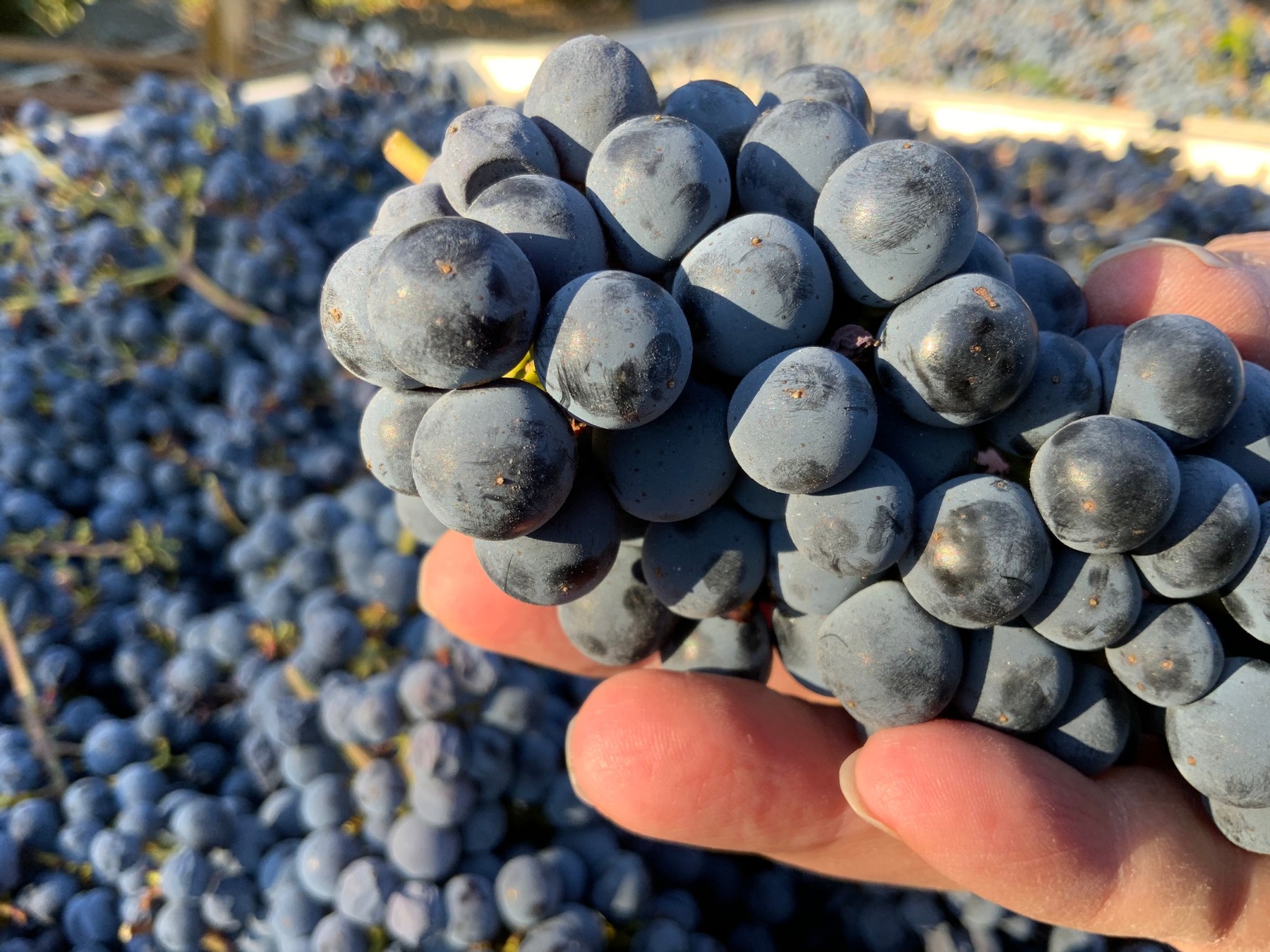 The fruit was quickly transported to Fayard Winemaking, Julien’s custom winemaking facility at the south end of the valley. This is where the first, critical steps of the process will occur, though as Julien says, it’s not the most important part: “Winemaking begins in the vineyard.” Julien’s wines are a pure expression of Caspar Estate terroir, highlighting the characteristics of the fruit, vineyard management, soil and climate. 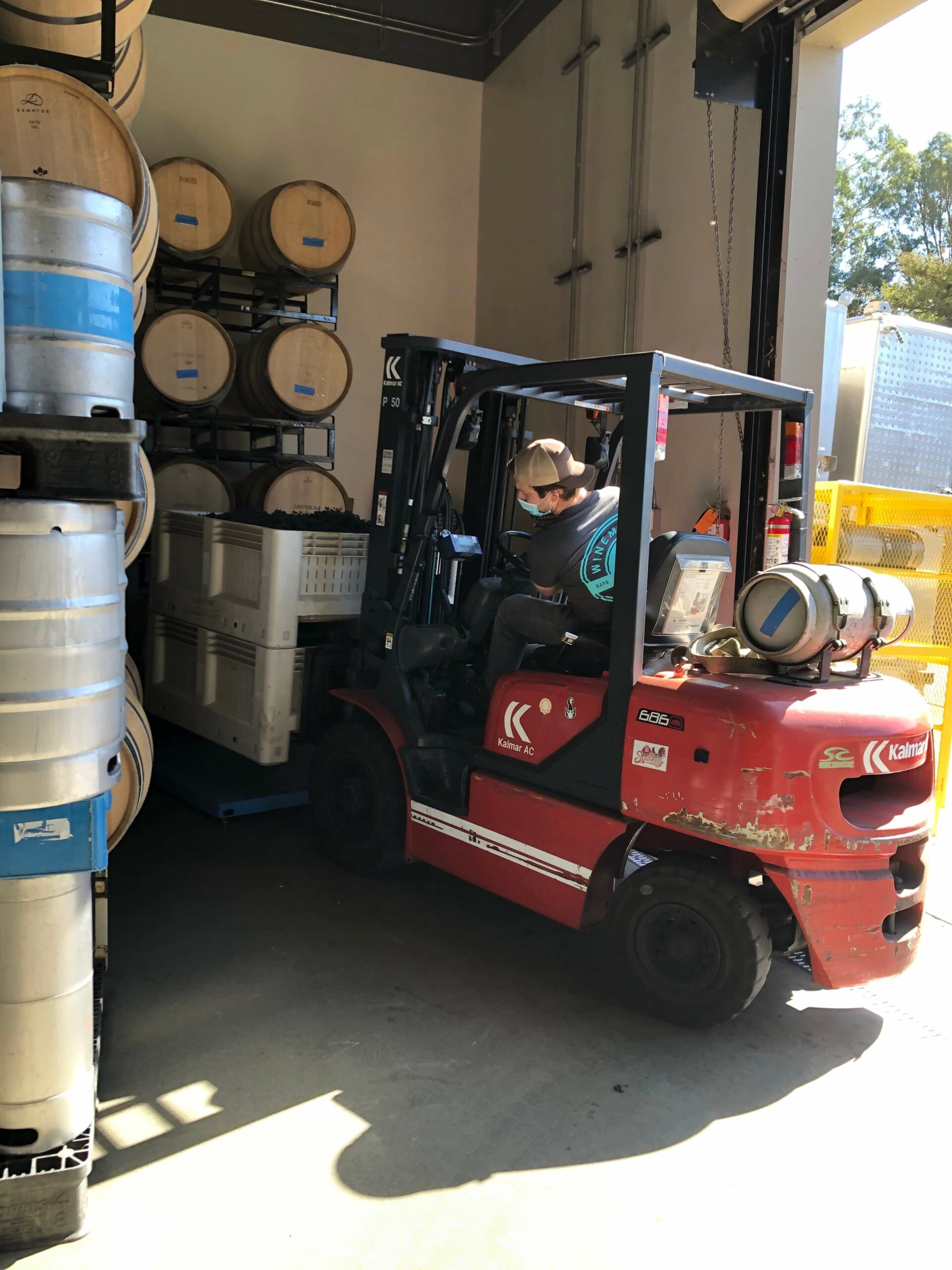 Each bin of cabernet grapes Is then weighed. If the grapes are heaped high, each bin holds about a thousand pounds of grapes, meaning each one of these bins will result in about 31 cases of wine. Interestingly, cabernet grapes weigh about half as much as table grapes, as they have far less water content. 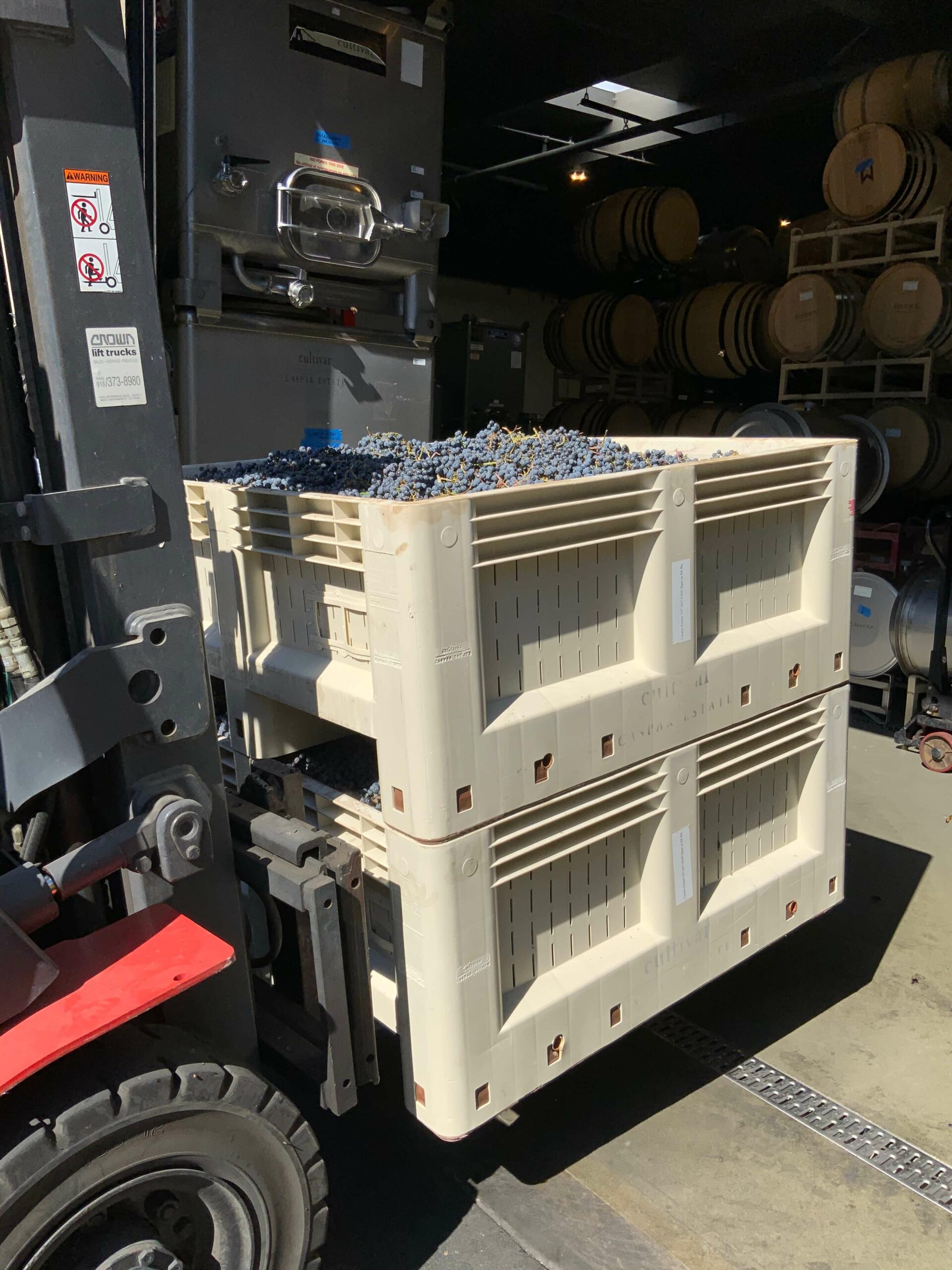 Next, the fruit is moved inside and stacked in front of the sorter. Julien’s winemaking team supervises all this work, making sure the fruit is moved as quickly as possible through the process. Consistency is key for Fayard, as it is another way of ensuring that winemaking doesn’t “get in the way” of the grape’s expression, but amplifies it instead. 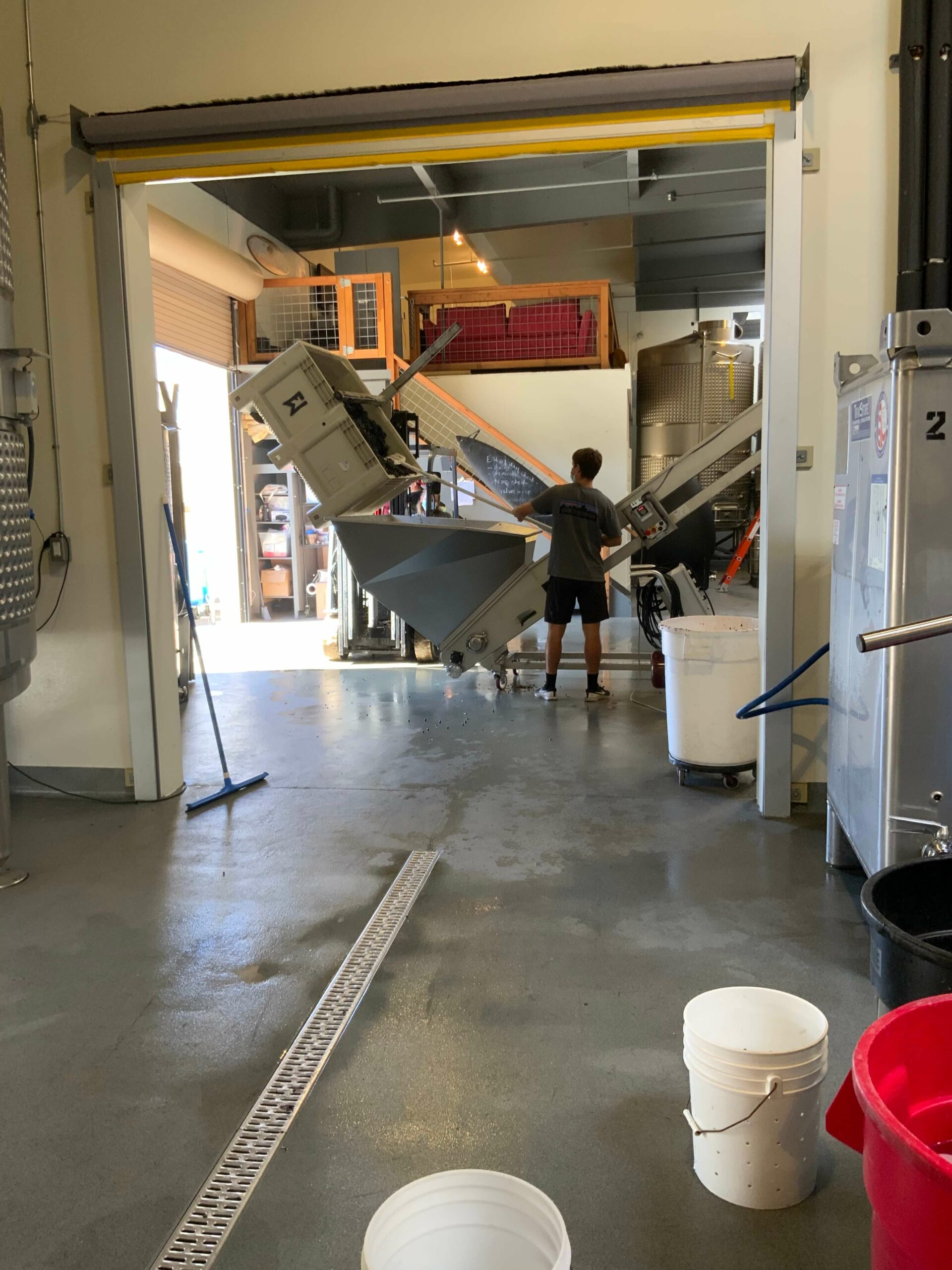 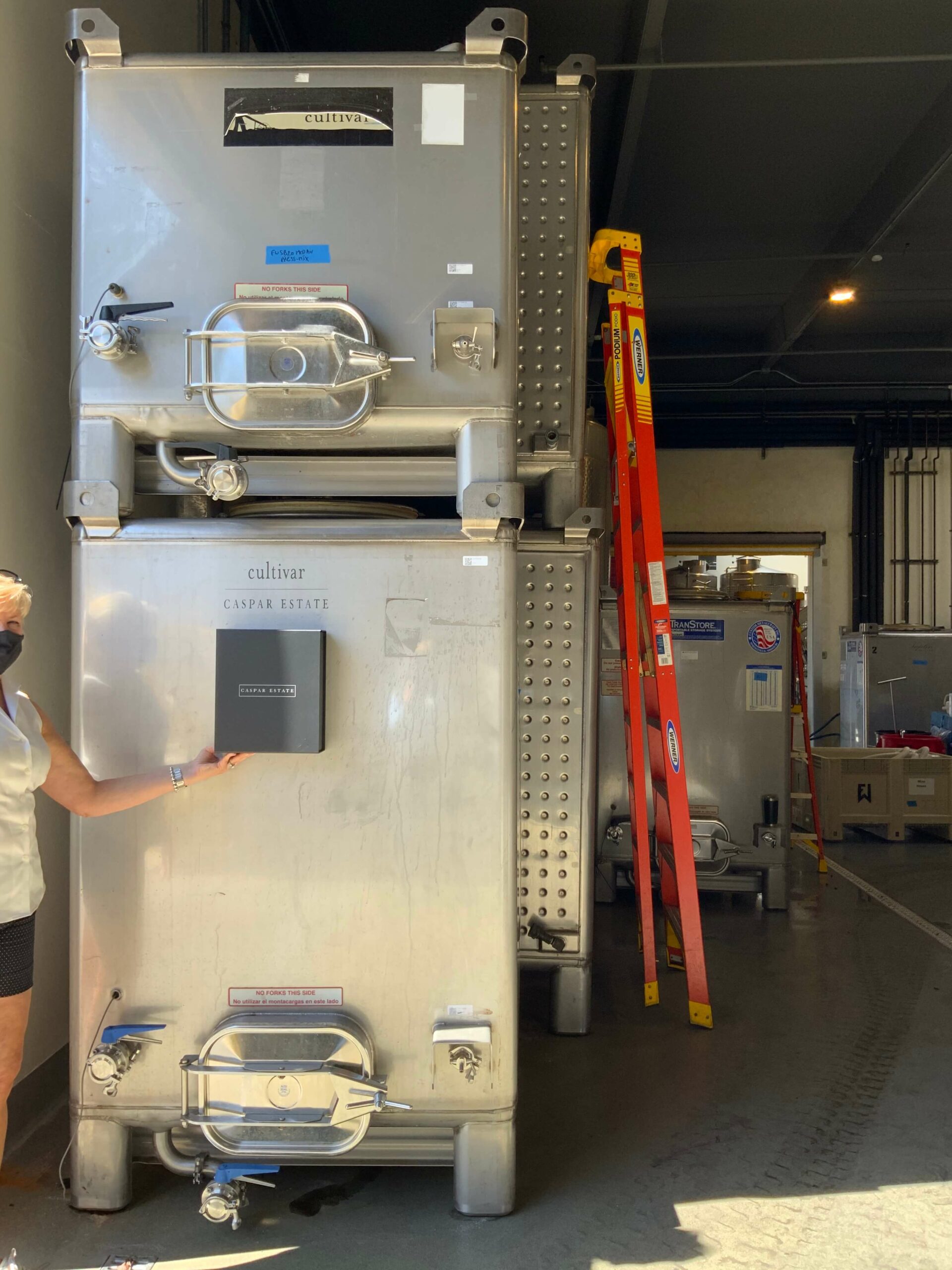 Yes, we admit it – we love to be there when the fruit comes in! It’s like seeing your children graduate from school!

With the juice now flowing to the tanks, Gingy and Deborah take a moment to pose for a selfie with Julien’s winemaking team. These men and women are the backbone of the operation, and an instrumental part in fulfilling our vision for Caspar Estate Cabernet Sauvignon. 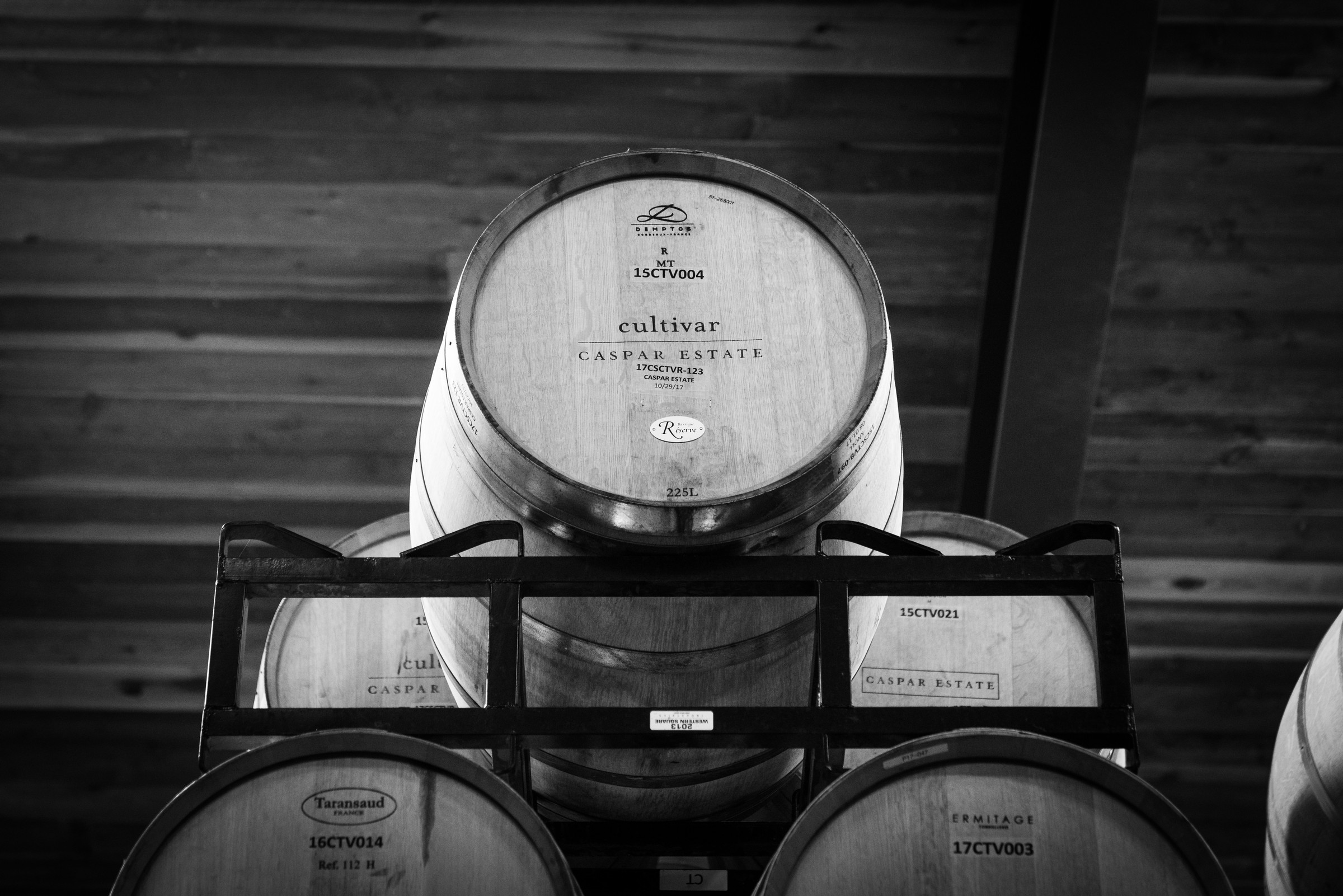 Eventually, our cabernet will wind up here, in 100% new French oaks barrels. Julien prefers the tight grain – as well as the tradition – of French oak. It was a tradition he was introduced to during his years with Chateau Lafite Rothschild, a First-Growth Bordeaux house. Our Caspar Estate Cabernet Sauvignon pays homage to the Bordeaux tradition, while still maintaining its Napa pedigree, thanks to great fruit, a great team, and the expertise of Julien Fayard.